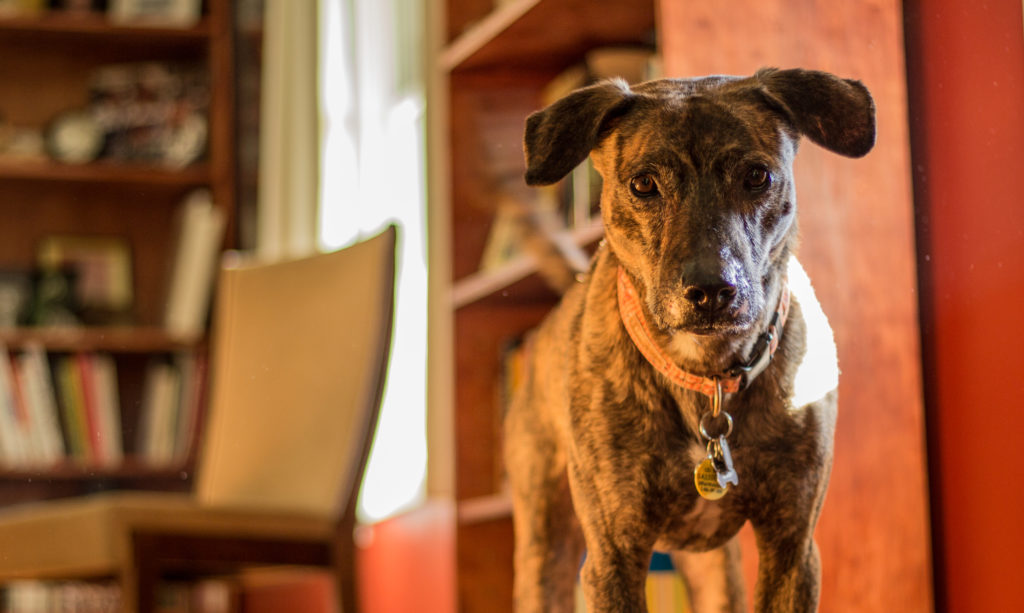 Tyson was faaaaaaaast. Like, with everything. The second the UPS guy turned into the driveway, he was on guard. He was literally impossible to overthrow with a frisbee, he’d always beat it to the spot and end up waiting on it. His meals were gone in times that would make a NASCAR pit crew whistle in admiration. The boy could move.

When he came to us, we didn’t see the speed; we saw all the things he was running from, to the point that we had to take a week to talk it over and to make sure that we really wanted to take him in. His fear of humans was such that it took almost a month for him to even make vague eye contact with us, and loud, unexpected noises would send him cowering to a safe corner. But, as with everything, he quickly became not only comfortable with us and our home, but within a few seasons was the very center of our family.

Tyson was the Sheriff, for better or for worse. If you were coming to our home, you had to pass his literal smell test. His signature move was to go put his nose right in the crotch of anyone who came to visit, and to read their reaction; if they shy away in (completely understandable) fear, well, then to him they clearly have something to hide and he wouldn’t take his eye off of them…but once he knew someone, that dog would run through brick walls to make them happy.

He was the reason we moved to the current home we love so dearly from our little condo – he never liked our next-door neighbor with the drinking problem and the anger issues, and he made no secret about it, which obviously didn’t encourage a great response from the guy. While it seemed like a crazy length to go to, moving just to keep your dog happy, little did we realize how much happiness the change would bring to us. Even now that he’s gone, I can’t think of home without thinking of Tyson sitting on top of the couch, starting out his window, waiting for whatever was next…

Tyson went through his share of pain, unfortunately. Soon after moving, we noticed he was developing sores all over his body, particularly in the area where the skin was thin and sensitive like his belly, his eyes, and his snout. We brought him to numerous vets, got all kinds of inaccurate diagnoses, tried all kinds of treatments, to no effect – he would hide, pathetically, in our closet unless it was time to eat or chase the frisbee, and he smelled like death. It was terrible, and our impotence in finding a solution for him was unbearable.

After two months of a steady downhill slide, we finally found a veterinarian in New Hampshire familiar with his condition – a rare and, in his case extremely serious situation where his own immune system was attacking a portion of his skin, causing the painful lesions. Putting him on a regimen of multiple very powerful steroids was supposed to be a temporary treatment to bring him back to a normal level, and while we never got him to a point where he could escape them entirely, they worked to control his symptoms and give him a very normal and happy day-to-day existence for a few years.

So you know how everyone always says that they want to die doing something they love? I don’t know that you could say Tyson loved chasing his frisbee as much as he was obsessed by it. I mean, do you like breathing, or do you just do it? He was honestly compelled to chase it, whether it meant absolutely destroying the bottom of his feet on crunchy February ice, pushing himself practically to heat exhaustion in the August sun, or just the typical 20 minutes of sprinting around like a madman. His attachment to that activity is the purest distillation of joy I’ve ever seen, and his satisfaction after a long and successful session was palpable.

It had been a long, cold winter, and the cold, chunky ice from a late April snowstorm was only just melting off of the soccer field where I would throw the frisbee for him. It was looking to be a great summer for our guy, our 4th together and we figured it to be his 7th on Earth, although since he was a rescue we were kinda guessing. We walked like we always did to the center of the field, him excited dancing and prancing in anticipation. I threw, he ran, I bent to pick up my glove (to avoid the inevitable slobbermitt I’d get from handling the frisbee), and when I looked up, he was on the ground right next to his frisbee…By the time I reached him, he only had one short whimper in him before the light left his eyes. One second he was going hard after that frisbee, and the next he was gone.

The next minutes, hours, days, and weeks are a horrible blur…but over time it became clear that shuffling off our mortal coil this way was all totally in character for our guy. His medication was a bulwark against a massive amount of pain and discomfort, but there was really no knowing how long it could hold out; given the choice of a long, painful goodbye or an unexpected and instantaneous event, we wouldn’t have been able to justify making any other choice, even if we could have. Like I said, Tyson did everything faaaaaast.

Tyson’s spirit is not gone, though. Because of him, and the love that he brought into our lives, my wife and I have gone from animal lovers to animal supporters trying hard to find ways to brighten the existence of other rescued animals. I have only one regret about Tyson, and that’s the week that we deliberated about taking him in, an extra week we could have had together.

Tyson would have been proud of us for learning that lesson – as is appropriate – very quickly. Life is short when you live it fast, and there’s no time to waste, after all. So, while he will always be our first pup, our Monster Man, our Bubby, our home still had a place for another dog when he left, and within a week we filled that place with our latest addition, an amazing hound dog named Luke who couldn’t be any more different from Tyson. We also couldn’t possibly love Luke any more than we do, and he really is Tyson’s last gift to us.

Tyson’s life was far from all sunshine and roses, but because of the wonderful rescue organizations in our state, he was able to avoid a life that would have been substantially shorter and darker. Our family believes that supporting organizations like these, Homeward Bound in particular, is a tremendous way for us to honor our boy’s memory, and for you to honor the legacy of love that your past pets have left you, as well. Adopt don’t shop, and take it from Tyson, the speediest dog I’ve ever met – do it today, there’s no time to waste!